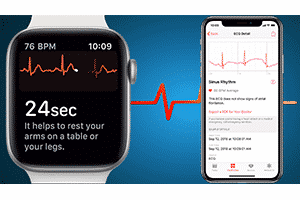 I previously recorded a review of the AliveCor KardiaMobile Device and KardiaBand on Medgizmos. These are FDA cleared for recording an EKG on the Apple Watch series 1 through 4, up to 5 minutes in length which can be interpreted by a cardiologist and transmitted to a patient’s physician.  Now Apple has integrated EKG support into its series 4 Apple Watch.  The application is free of charge in contrast to the AvliceCor devices and KardiaBand which now sell for $100 each.

The Apple EKG is limited to a 30 second recording. It integrates into the Apple Health application and displays the recording upon completion, this can be saved as a pdf file which can be emailed to the patient’s physician. The apple watch apple is very nice because it allows patients to record symptoms that may be associated with the EKG such as fatigue, shortness of breath or palpitations. It even allows patients to activate a 911 emergency call (also demonstrated previously on Medgizmos ).

The Apple Watch and associated Apple Health application allows patients to record activity, nutrition and sleep activity.  In the future the watch may have the capability to record blood pressure measurements as well as transcutaneous glucose  readings and perhaps even pulse oximetry readings. Stay tuned!

You have Successfully Subscribed!