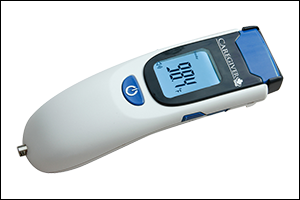 Early physicians recognized that illness often was associated with fever, but it took centuries for scientists to develop the means to measure body temperature. Although Galileo in 1592 was the first to fashion a crude thermometer, it was another Italian scientist, Santorio Santorio, who was the first to take oral temperatures in 1625. His thermoscope, as it was called, was large and cumbersome, and took hours to perform a single measurement.

It was not until the mid-1800s that the German physician Carl Wunderlich developed a foot-long thermometer that could take clinical temperatures. In 1868, he published his data of more than 1 million axillary readings from more than 25,000 patients. He determined that there was a diurnal variation in daily body temperatures ranging from 97.3°F in the morning to 99.5°F in the evening. He also originated the standard of 98.6°F as “normal body temperature” that we use today. His readings took 20 minutes to perform, and for anyone but the most patient of physicians, this was not a practical device.

When I opened my first practice in 1986, I was intrigued by an advertisement in Contemporary Pediatrics that caught my attention, and days later I was the proud owner of a FirstTemp tympanic thermometer. The manufacturer (Intelligent Medical Systems; Carlsbad, California) promised the device’s measurements were as accurate as oral and rectal temperatures taken with glass thermometers. I was initially skeptical of this high-tech thermometer, but within weeks it proved to be a very popular device among staff, providers, and patients. The reason it was successful was that it required little patient cooperation and took temperatures in seconds, and it produced measurements comparable to those obtained with our digital oral and rectal thermometers.

Before the Haemophilus influenzae type b vaccine first became available in 1985 and the first pediatric conjugate pneumococcal vaccine became available in 2000, pediatricians routinely encountered severe illnesses in patients that included meningitis, septic arthritis, osteomyelitis, and sepsis. These were so common that blood cultures and spinal taps were routine office procedures. Before the introduction of the H influenzae and pneumococcal vaccines, 3% of young febrile children without a focus of infection had positive blood cultures for H influenzae, Streptococcus pneumoniae, or Neisseria meningitides. Six percent of those patients positive for pneumococcus also were discovered to have meningitis, while up to 20% of positive blood cultures for H influenzae were associated with meningitis. Today, the incidence of occult bacteremia is 0.5%, and we rarely perform blood cultures or spinal taps in the workup of infections, except in febrile young infants. The key point is that, just 2 decades ago, parents and pediatricians were alerted to the possibility of severe pediatric illness by the presence of fever, and they were comforted by its absence. Today, documentation of a fever alerts physicians regarding the cause of the associated symptoms. In most situations, there is an infectious cause with rheumatologic illnesses, malignancy-related fevers, and period fevers being much less common.

Ron Benincasa and Gary O’Hara invented the first infrared ear thermometer, the FirstTemp mentioned above,  which was introduced to medical practices in 1984. Because of its speed, it became extremely popular and eventually sold about 80,000 units. It was replaced by a more streamlined unit called the Genius and the company was eventually sold to Sherwood Medical (Now Covidien) in 1993. You can still purchase the Genius 3 online for $379 dollars.

Ron and Gary reinvented infrared thermometry about a decade ago, forming a company called Thermomedics, producing first accurate non-contact clinical forehead thermometer called the Caregiver PRO-TF300-CS. Ron estimates the company has sold more than 80,000 units and studies have demonstrated that the thermometer is extremely accurate. It takes temperatures in 2 seconds and two AA batteries can provide up to 15000 measurements.  In my own experience it produces temperature measurements comparable to that produced Exergen’s TAT-5000 contact thermometer, while costing substantially less. 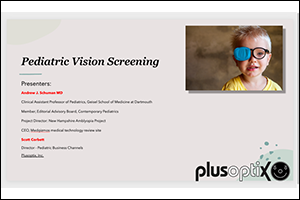 Amblyopia is one of the most common visual problems of childhood, occurring in 2.5 % of children. It is defined as poor vision caused by abnormal development of visual areas of the brain; if undetected and untreated it can lead to permanent vision impairment.

Unfortunately, less than 40 % of children are screened for this condition. Causes of amblyopia include strabismus (misalignment of eyes), anisometropia (inequality of vision of both eyes because of refractive errors or astigmatism), cataracts, ptosis, or other factors. Because children do not complain of problems with visual acuity, and affected eyes often appear normal, amblyopia can easily go undetected unless a child has vision screening done routinely at health maintenance examinations.

Vision screening in children aged younger than 3 years in a medical office can be challenging because few children this age can be screened with a vision chart. From age 3 to 5 years, screening is possible with Snellen charts, Tumbling E charts, or picture tests such as Allen Visual Acuity Cards, but this is time consuming and can lead to inconsistent or erroneous results. According to the latest 2016 guidelines Screening instruments detect amblyopia, high refractive error, and strabismus. I recommend that  Instrument-based screening  should be performed at age two and repeated at each annual preventive medicine encounter through 7 years of age.

Amblyopia remains treatable until age 7 years, with rapid decline of effective treatment after age 5 years. The goal of vision screening in infants and young children, therefore, must be the early detection of high severity (magnitude) amblyopia risk factors (ARFs), including moderate or severe astigmatism, anisometropic myopia, high hyperopia, severe strabismus, and opacities in the visual axis, including retinoblastoma or other ocular entities that cause opacities that interfere with transmission of light to and from the retina.This webinar, sponsored by Plusoptix, details how screening with Plusoptix photoscreeners can facilitate identification of children at risk for amblyopia who should be seen by an optometrist or ophthalmologist for diagnosis and treatment. It also describes a pilot study demonstrating that if a child who refers on vision screening is given an appointment with a vision specialist before departing the pediatrician’s office, the success of achieving a completed diagnostic exam will exceed 90%!

In 2001, 2 developmental pediatricians, Drs. Barbara Howard and Raymond Sturner, developed the Child Health and Development Interactive System (CHADIS; Total Child Health Inc; Baltimore, Maryland), a comprehensive web-based system for screening children for behavioral and developmental problems. The CHADIS online portal has received 26 million dollars in federal and foundation grants for research and development of the current system. To date, more than 5000 providers from around the globe are using the CHADIS system, and it continues to grow in features and popularity. The CHADIS assessment tool allows pediatricians to invite parents to fill out online, age-appropriate screening tools in advance of well-child visits. The CHADIS system evaluates the forms filled out by parents, performs scoring when indicated, and alerts pediatricians of issues that need to be discussed with parents at well-child or behavior-related visits. Many pediatricians speak favorably of the CHADIS system in that it allows them to identify parental concerns and behavior issues that would have gone unidentified in the past. A CHADIS subscription costs about $1500 per provider per year, paid either annually or via monthly installments with discounts available for volume licenses.

As of this writing, CHADIS incorporates more than 200 screening tools that pediatricians utilize frequently, such as the Modified Checklist for Autism in Toddlers Revised with Follow-up (MCHAT R/F), Ages and Stages (ASQ), Vanderbilt Assessment Scales, Patient Health Questionnaire for Adolescents (PHQ-9), and Generalized Anxiety Disorder (GAD-7) forms, as well as forms. However, CHADIS doesn’t stop at screening. It also provides a full library of resources for pediatricians and parents to assist in management once a condition is diagnosed. Another benefit of CHADIS is that Dr. Howard conducts a case webinar on a monthly basis to discuss issues related to developmental screening and management.

The CHADIS screenings can be used by parents via their home computers in advance of visits or alternatively via a tablet-based interface that is handed to them at the reception window. The CHADIS reports can be copied and pasted into your EHR so that the results of the screening are documented.

For an excellent overview of chides and demonstration of new features please visit:  https://youtu.be/_pKaAAhPAT0 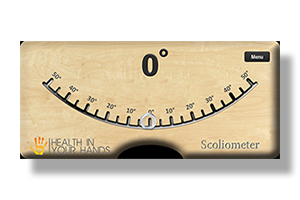 Pediatricians typically screen adolescents for scoliosis at preventive health visits. Usually we screen visually and obtain a screening scoliosis x-ray series if we suspect significant curvature.   One can use the Scoliometer application from Dr. Kevin Lau/Health in Your Hands to screen patients with any mobile device.  The inclinometer built into the device facilitate this. One places the mobile device on the child’s spine at the area of greatest curvature and records the Angle of Trunk Rotation (ATR) displayed. Patients with ATRs of 5 degrees or higher should be referred to  orthopedics for further evaluation.  An ATR of 7 degrees corresponds to a radiographic Cobb angle of 20 degrees, which indicates mild scoliosis.

The application is just $4.99 for IOS and $4.49 for Android devices, and includes a built in video guide and recommendations for its use.  Dr. Lau recently released the $4.99 ScolioTrack application to facilitate parents monitoring their child’s scoliosis. 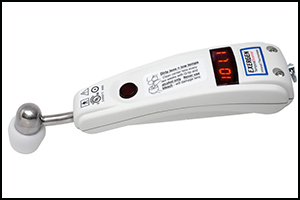 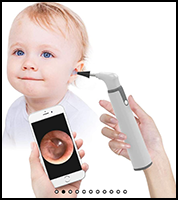